Tottenham Hotspurstar Harry Kane who has been out for just over a month is reportedly getting very close to full fitness. Spurs have actually been coping well without their star striking duo of Harry Kane and Dele Ali in recent weeks, against their initial fears but Pochettino and fans alike will be keen to get them back into the starting line up. 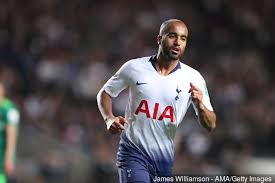 Kane picked up an ankle injury back in January, in the closing moments of their tie against Manchester United at Wembley in which Spurs lost by a goal to nil, with Dele Alli injuring his hamstring in the following match.

Initial prognosis indicated that Kane will be out until match, However, he appears to have shown tremendous e powers of recovery and could make a return to action as early as this weekend. Fernando Llorente, Lucas Moura, and Heung Min Son who made his return from Asian cup have managed to keep things ticking in the absence of Kane and Alli. As a matter of fact, Tottenham haven’t dropped a single Premier League point since the stars were injured.

They only match they lost was in the FA cup against Crystal Palace. Their excellent run of form in the league has propelled them right back in with a shout of winning the Premier League title this season. Theywill take a trip to Turf Moore where they face a difficult test against Sean Dyche’s Burnley.

With Manchester City playing in the Carabao Cup final againstChelsea this weekend, and Liverpool not facing Manchester United at Old Trafford until Sunday afternoon, Spurs have the chance to close the gap on the top two to just a couple of points.The were also able to smash three past German Bundesliga leaders Borussia Dortmund without conceding in the Champions League last week.

According to club sources, Harry Kane is expected to be back on the 23rd of February, with Dele Alli expected to make his return a week later on March 2.